“His journalistic style is to use shock value because he sometimes lacks substance. I rarely find myself informed by Don Lemon. He uses a lot of theatrics … buffoonery and minstrelsy.” ~V. Nenaji Jackson, Ph.D., professor of African Studies at California State University Los Angeles

The midterm elections are upon us. Haters on both sides are emptying their rifles at each other. The prize of Best Hater of the Week goes to CNN news anchor Don Lemon.

That’s right. Don is a news anchor. News anchors are dignified and solid. They report the news fairly, right down the middle. They do not give their own opinions on the news. That is not their job. Except for Don Lemon.

What does “do something about them” mean? Sounds a little ominous, doesn’t it? Lemon left it hanging. He also did not explain the obvious contradiction in his words. First, he admonishes us “not to demonize any one group or any one ethnicity.” Then in his next breath, Don demonizes white men by calling them the biggest terror threat in the country. His assumption is that the violent white men are all right-wingers. Yes, it is quite a leap he takes with that one.

But let’s back up. First, the idea that a person’s race makes him act violently is racism, pure and simple. When criticized for making racist remarks, Lemon cited a government study that he said proved statistically that white men – especially right-wing white men – are the biggest terrorists. Worse than ISIS? Worse than the terrorists who caused 9/11? Lemon insisted his statement was based on fact, and therefore beyond argument.

Of course, Don Lemon is wrong. The mustard seed of truth in his words, however, is that men are more violent than women, and white men commit more violent crimes in America than men of other races. But how could it be otherwise? There are many more white men than non-white men in America. Go to China, and you will find the most violence is caused by Chinese men. The same is true in Arab countries.

Lemon plays fast and loose with the data when he asserts that “right-wing” men are more violent. While it is true there are more white shooters in America, their violence is not political. Our shooters aren’t right or left wing – they are politically incoherent. In fact, police search for motives and come up empty-handed. To call them all of America’s white male shooters “radicalized to the right” is seriously incorrect, and probably dishonest.

I say probably dishonest because Don Lemon is an intelligent man. But his intelligence is blunted by his partisanship. He is known as the most left wing of CNN’s assortment of liberal anchors. Lemon should be professional enough to contain his passions and not assert his political opinions as fact, especially when his role as a news anchor on a major cable network news program gives him a built-in credibility.

But Don Lemon is not credible on this subject. His biases are too flagrant. Not only is he flat out wrong about “right-wing terrorists,”  he ignores the left wing white men in real domestic terrorist organizations like Antifa who pepper spray women and girls lacking in political correctness, and punch people in the mouth just because they wear a Trump t-shirt. The left-wing white men in Antifa are terrorists by definition. A terrorist uses violence and intimidation against civilians in the pursuit of political aims.

Another example from the left wing is the 2017 shooting of congressional Republicans by a leftist white male who shouted “This is for healthcare” before unloading on defenseless Republicans at a ball field. Somehow this escaped Lemon’s gaze as well. So, apparently, did the fact that he has a white male significant other. So in the world according to Don Lemon, only right-wing white men are bad. The others, including his boyfriend and the thugs in Antifa, well, they are okay.

Lemon has taken a lot of heat for his remarks. His employer, CNN, which also includes some white men who sign Don Lemon’s paychecks, has protected him by remaining silent. There has been a petition (thirty-five thousand signatures and counting) circulating to fire Lemon, and it has not been generated by radicalized right wing white men. This petition was started by Lemon’s fellow African-Americans. They are accusing Don of being biased. The petition to CNN reads, in part:

“Mr. Lemon has failed his responsibility because he seems to forget the true essence of journalism: to call the news how you see it and not judge, defame or antagonize.”

Speaking of “judging, defaming, and antagonizing”, Don Lemon called Donald Trump (another right wing white man) a racist. Lemon said he had to call Trump a racist in order to keep his journalistic integrity (nice to know he thinks about that). Trump, for his part, called Lemon hateful, dumb, and a lightweight. Not quite true. Although Columbia Journalism Review dubbed him the “Worst Journalist of 2014,” Lemon is not dumb. Just completely partisan. And that makes people say stupid things. 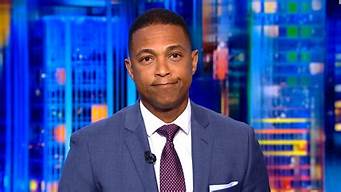