The God on My Wall

A decorative plate hung on the wall of my childhood bedroom. On the plate was the face of a dark-skinned, dark-haired, dark-eyed Jesus gazing heavenward. He looked perfectly composed, perfectly receptive to the Father’s will. An ethereal light emanated from his body, physical evidence of his holiness, his divinity.

I looked at that picture every night when I was growing up. Sometimes the picture comforted me. Other times heaven seemed far away. The Baptist church I went to did not bridge the gap. I wore uncomfortable clothing and squirmed through some tough sermons. Our preachers liked Jesus, but not much else. I liked some of the songs: The Old Rugged Cross, Just As I Am, and Holy, Holy, Holy. During altar calls I wondered what it would be like to walk up there. What would the preacher say to me? Would I be changed? But I never went up.

I was in church one hot summer’s night during Missions week. A cooling breeze slipped through the open window I sat next to; stained glass windows were considered idolatrous by my church – they were also too expensive. A spirit seemed to come to me on the breeze that snuck in the window. I felt remarkably peaceful and happy. A strong urge came to respond to the altar call, but I didn’t. This was my first experience of God visiting a church.

My last interaction with Bellaire Baptist church also happened at night, this time at our home. Instead of an invisible spirit, we got the preacher’s wife. She didn’t come through a window; she rang our front doorbell. I looked at Mrs. Alexander through the screen door and said nothing. She read my teenage body language correctly. With a pleading look on her face Mrs. Alexander said, “Don’t shut Jesus out of your life.” I shook my head and left her standing there. Later I was angry that I felt guilty about what she said.

Mrs. Alexander didn’t know that Jesus never came off the decorative plate on my bedroom wall. He was nice, even inspiring, but he didn’t help me. “Jesus loves me, this I know, for the Bible tells me so,” went our Sunday school song. Another song went, “Jesus loves the little children.” These assertions provoke the perennial questions. If Jesus loves the little children, why doesn’t he protect them from abortion, child abuse, war, and starvation? Why didn’t he protect me better? Why doesn’t Jesus protect my own children better?

Such questions are a ticket to classic theological debates that often generate more heat than light, a vortex sucking you into age-old dualities: faith or reason, hope or experience, God or no God. None of the arguments on either side of the divide helped the childhood me feel less shut out of God’s life, or more worthy of his love. I prayed and nothing changed. Life was still crazy.

It was tough at home. Bad things happened. We were a desperately unhappy family. Every Sunday we dressed up, went to church, and were told not to listen to music, not to dance, and not to smoke or drink. Then we went back home and church and God disappeared for another week – unless Dad went off his meds and started hearing voices and having religious delusions. Then he’d mow the lawn shouting at the top of his voice, “Hallelujah, the Lord is risen!” Jesus definitely came off the wall for Dad. While Daddy and God rocked and rolled, the neighbors called the police, and Daddy’s family looked for places to hide.

Did God make people crazy? Did God like crazy people more than normal people? Why was God such good friends with a man who tormented and bullied his family? Despite these misgivings I read a book about the Holy Shroud when I was a teenager: you know, the burial cloth Jesus was buried in. All the science behind the Shroud supported the gospel stories of Jesus’ crucifixion. I also read Life After Life, by Dr. Raymond Moody. I was encouraged and comforted by these books. I wanted to believe. Then I came of age and my church turned to dust on my rearview mirror.

The SP fivers are called sedevacantists, a Latin word meaning vacant chair. It is a term used for the status of the papacy between the death of one pope and the election of his successor. The SP Fivers believe the papacy has been vacant since the death of Pope Pius XII in 1958. According to them, all subsequent popes – even though they continue to reign as popes – have been heretics, and therefore automatically excommunicated from the Catholic Church.

Bellaire Baptist Church is now the Church of St. Anne (the mother of the Blessed Virgin Mary). A cousin group of the SP Fivers has elected their own pope, who reigns over a few dozen people and celebrates Mass at Holiday Inns. There are reportedly at least ten other ‘popes’ around the world. One lives in Kansas and was elected by his parents and a lady friend. Pope Michael, as he calls himself, is not even a priest. He lives on a farm with his parents, waiting for the world to recognize his stature. 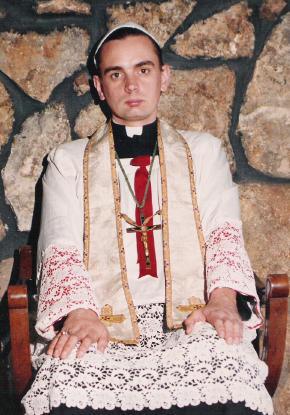 And I thought the Baptists were wound too tight. You want crazy? Turn Catholic. This, of course, was exactly what I did.