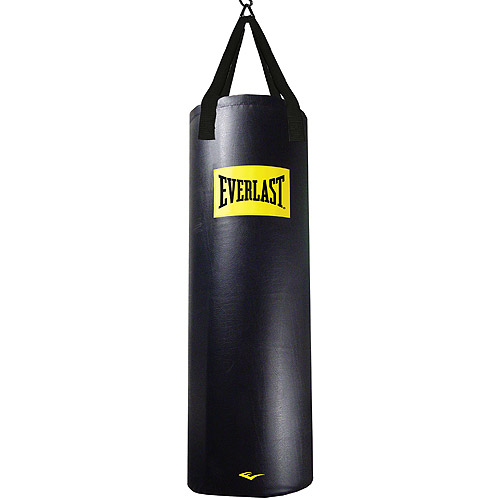 I’ve been hitting the heavy bag for about a year. I’m not a boxer or an MMA fighter. I just like hitting things without destroying property or hurting people. It releases stress and tones my shoulders and arms. Hitting the heavy bag can be a good cardio workout too – at least the way I do it. Many of my fellow bangers have better boxing form than I, but they only hit the bag for a few minutes. They really thump it, then stop.

I hit the heavy bag hard too, but mostly I hit it for a long time. I keep my arms and legs and body moving in a slow circle around the bag and just keep hitting it: tap-tap-thump-thump-tap-thump-tap. I get a good sweat going and I get in a rhythm. I listen to thrash metal or fast techno/rave music, then try to punch to the beat. Sometimes I get lost in the motion and the music and enter a zone where it seems I could hit the bag forever. The other day I punched for 25 minutes without stopping.

Workouts like that wore out my gloves. I have MMA gloves and what little padding there is has broken down or flattened out. Less padding makes it easier to bust a knuckle.

So I went to the local sports store and found a pair of boxing gloves with attached thumbs: a nice feature to keep my thumbs out of harms way. Boxing gloves are bigger than MMA gloves and have more padding. I grabbed the gloves and tossed them on the counter. The guy behind the counter looks at the gloves, looks at me, and smiles, “Uh-oh, someone’s getting it tonight.” I smile back: “Only the heavy bag.” He comes right back: “Oh, is that what you’re calling her these days?”

Okay, I’ll go along with the guy to get the gloves. “Well I guess you’ve seen through me,” I say, and give him my debit card. He swipes the card and smiles again: “The least you can do is get her a mouthpiece.” I snap my fingers: “I knew I was forgetting something.” The guy hands me the debit card and a receipt. He pushes the gloves at me with some final words of wisdom: “Yeah, her smile was the only thing left I still liked.”

I haven’t had that kind of politically incorrect conversation in years. I guess counter guy has sold a lot of boxing gloves and has heard all the jokes about them. So his comments could be dismissed as unrealistic sales banter between two guys: if a guy was going to pop his girl it would be impulsively, in the heat of the moment. He wouldn’t stop, go find his boxing gloves, then come back, strike a boxing pose, and wait for the bell to ring.

I know about domestic violence. I grew up with an unpredictably violent father. He’d go after mom or us kids at the drop of a hat. When I grew up I swore I would never be like my dad. And I wasn’t – at least not the violent part. Dad was a Golden Gloves boxer and had the broken nose to prove it. I always liked boxing. When I was a teenager I subscribed to two boxing magazines. I enjoyed reading about the old fights, and seeing pictures of boxers from long ago. I memorized the names and chronology of all the heavyweight boxing champions from John L. Sullivan to Muhammad Ali. One of the few activities Dad and I enjoyed together was talking about boxing. He knew a lot about the boxers I read about.

There is something naked about boxing. Two men wearing shorts, a mouth guard and a cup; meeting in public to try to win by hurting the other; each man totally dependent on his skill, will, and courage. Victory and defeat in this setting is very personal. I read former heavyweight champion Floyd Patterson’s autobiography and was struck by his gentleness and his fears. When Sonny Liston beat him, Patterson wore a disguise so people wouldn’t recognize him.

I’m looking forward to trying my new gloves. I usually go to the gym during the afternoon, either on my lunch break or on the weekend when there are no cardio classes in the room with the heavy bags. I get the right music on my MP3 player, adjust the volume to loud and check the time. I clip the player to the back collar of my t-shirt and slip the gloves on. I hit the bag quickly, almost softly, to warm up. The lights in the room are out but I see myself in the mirrors. I punch and move and move and punch. I start high up on the bag, then settle to the middle and bang away. There are six heavy bags and some days I get them all swinging from the steel cables connecting the bags to six V shaped steel beams coming out of the wall.

Sometimes I wonder who – or what – I’m fighting. Most of the time I don’t care. When I’m done I’m soaked with sweat. My back is knotted up and I stretch it out. I pull off the gloves and leave the dark, quiet room. Until the next time. 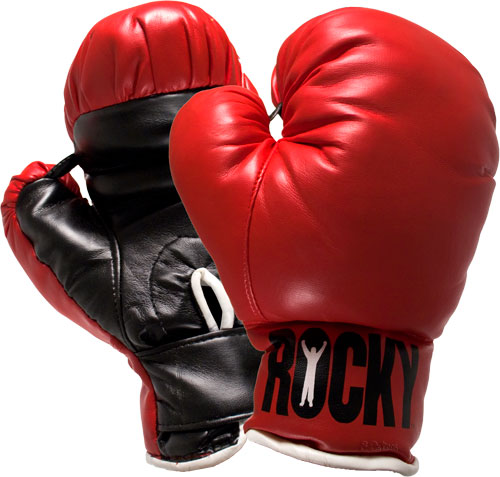