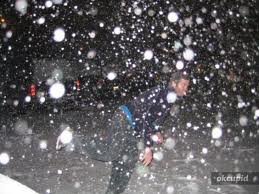 There will be two feet of new snow on the ground by midnight. Moinarc has never operated a snow blower. He uses a shovel: over, and over, and over.

It’s easy to live dangerously in the land of 10,000 snowstorms: stay here a few winters. Yesterday Moinarc drove to work on unplowed freeways. He could see fifty feet ahead of him before everything turned white. The trick in white out conditions is to stay on the road, no matter how slow you have to go. A maniac roared by Moinarc, spun in a complete circle, and disappeared into the white. Moinarc didn’t stop, and made it to work in one piece.

Smarter employees wouldn’t have risked their necks for the nickel. Moinarc found this out when he got to work. Then there was the small matter of getting out of the parking lot at the end of the work night. The entrance was plugged by two feet of plowed, compacted snow. The parking lot had a foot of snow, and a nasty incline (or decline) that had Moinarc spinning his tires trying to get out. At 12:30 am he began shoveling the parking lot. One hour later Moinarc’s co-workers came outside to check his vita signs.

Moinarc was fine; it was a good thing he had given up cigars fifty days ago. This allowed him to shovel, and shovel, and shovel. And spin, and spin, and spin his tires. He had meant to get new tires during the last snowstorm. A week of balmy weather lulled tightwad Moinarc into an inconvenient sense of security. An inmate came out and told Moinarc to stop spinning his tires. “Do you need a push?” he asked, then said, “I don’t want to hurt myself.” Moinarc didn’t want him hurt either. “Just give me some moral support,” he told the inmate.

Moinarc backed up, then took the incline in first gear, driving very slowly. He continued to drive very slowly, up the incline and onto the plowed road that eventually took him home – a journey surreal in itself, featuring deserted, snow-covered freeways punctuated by the flashing lights of cars in ditches, and as Moinarc neared home, a tow truck and highway patrol car assisting a stuck Humvee. Thunder and lightning accompanied the falling snow. No, Moinarc is not kidding.

He got home around 2 am, and shoveled his sidewalks. This morning Moinarc shoveled his vehicle out after it became trapped in snow from the city plows (Moinarc doesn’t have a garage). It is still snowing, and Moinarc has much more shoveling tonight, and probably tomorrow. But now he is warm, his belly is full, and he will abide.

Some people move when they can’t stand the weather. There is nothing wrong with that, of course, but bad weather has a way of catching up with everyone, no matter what we do to try to avoid it. Call it character building. Call it God’s way of getting even with us; or if you are pious, God’s way of drawing us closer to himself. Moinarc hasn’t been pious for a while, but he was praying on the road yesterday. And it occurred to him, as he inched up the parking lot incline last night, that the Catholic inmate that came out to not help him may have said a prayer for him, and that this may have made the difference.

One day all the questions will be answered; this is what believers believe anyway. For now, it doesn’t matter if you can’t stand the weather. All you have to do is figure out a way to live through it.